Leonard DAVIS was born at Victor Harbor on 28 May 1924, the fourth child of Thomas DAVIS and Beatrice Mary DAVIS (nee PITTS). Len, as he was known, was educated at the Victor Harbor Primary School. Two older brothers, William (SX28596) and Frank (SX27151), served in the 2nd AIF.

On leaving school, Len trained as a men’s barber; on 15 April 1942, he enlisted in the Royal Australian Naval Reserve as an Ordinary Seaman II, presumably with parental approval, as he was not yet 18 years of age. During ‘the next five months at Flinders Naval Depot, Len completed both recruit and gunnery training, being promoted to Ordinary Seaman on 30 July 1942.

Len was drafted to the Sydney Naval Depot HMAS Rushcutter where he remained from 9 October 1942 to 16 July 1943. During that period, Rushcutter housed the Sydney Anti-Submarine, Gunnery and Radar Schools in addition to being the base for the many small vessels and patrol craft used in the Sydney area. It is most likely Len served as a crewmember on some of the small craft as he was promoted to a/g Able Seaman on 28 May 1943. He briefly served in the tug HMAS Heros during July before being drafted to the corvette HMAS Gladstone.

To reach his ship he travelled by train to the Brisbane Naval Depot HMAS Moreton to await its arrival, eventually joining it on 23 September 1943. Gladstone was one of the ships tasked to escort the first of a series of convoys from Cairns to Port Moresby and Milne Bay.

On 18 December 1943, Gladstone, with HMAS Gympie and HMAS Stawell, were escorting a convoy of eight ships carrying troops for Milne Bay when seven of the convoy ran aground on Bougainville Reef in the Great Barrier Reef just after 9.30 pm. In the confusion of a flurry of signals, Gladstone assumed the convoy was under attack and increased speed towards the apparent danger. Unfortunately more reef lay ahead, but by rapidly reducing speed, Gladstone managed to only ground lightly. Although Gladstone quickly manoeuvred herself off the reef, one propeller was damaged.  Next morning, Gladstone escorted three of the transports back to Cairns before sailing to Brisbane for repairs.

Operational again in January 1944, Gladstone resumed escorting convoys to Milne Bay until March when she proceeded to Adelaide for refit. This fortunate return to South Australia allowed Len to enjoy four weeks of home leave during March and April. On 29 April 1944, the ship returned to Milne Bay to begin escort and anti-submarine patrol duties between the Madang, Langemak, Hollandia and Biak areas.

Len was drafted to HMAS Bungaree on 6 June 1944 where he was confirmed in the rank of Able Seaman. Bungaree was an Adelaide Steamship Ltd cargo ship taken over in 1940 and converted to lay defensive minefields along Australia’s east coast, Port Moresby and Noumea. With the Japanese now being forced back, Bungaree was used as a survey ship from January 1944 before becoming a stores ship from August.

In early September 1944, Len briefly returned to HMAS Rushcutter before his transfer to another Sydney depot, HMAS Penguin until 23 January 1945, when he rejoined HMAS Bungaree.

Granted leave from Bungaree, he returned to Victor Harbor. Whilst there he visited his cousin, Alan DAVIS, at the South Coast District Hospital; his cousin had been in hospital for some time suffering from spinal injuries. On the evening of 13 June 1945, after some celebrating, Len, with John FISHLOCK of Encounter Bay, were visiting Alan who told them ‘(he)…. was sick and tired of hospital …’.

Len and John resolved to give Alan some respite from hospital and decided to push him in his hospital bed-cot to his home in Victor Harbor.  Tragically, the party were struck by a motor vehicle in Victoria Street; the vehicle was driven by another local sailor home on leave, Signaller Peter PLUMMER of Currency Creek. Signaller PLUMMER was a shipmate of Len.

Len died in the hospital two hours later while the others were admitted with multiple fractures.

Able Seaman Leonard Davis was buried in the Victor Harbor Cemetery and is accorded the honour of a war grave. 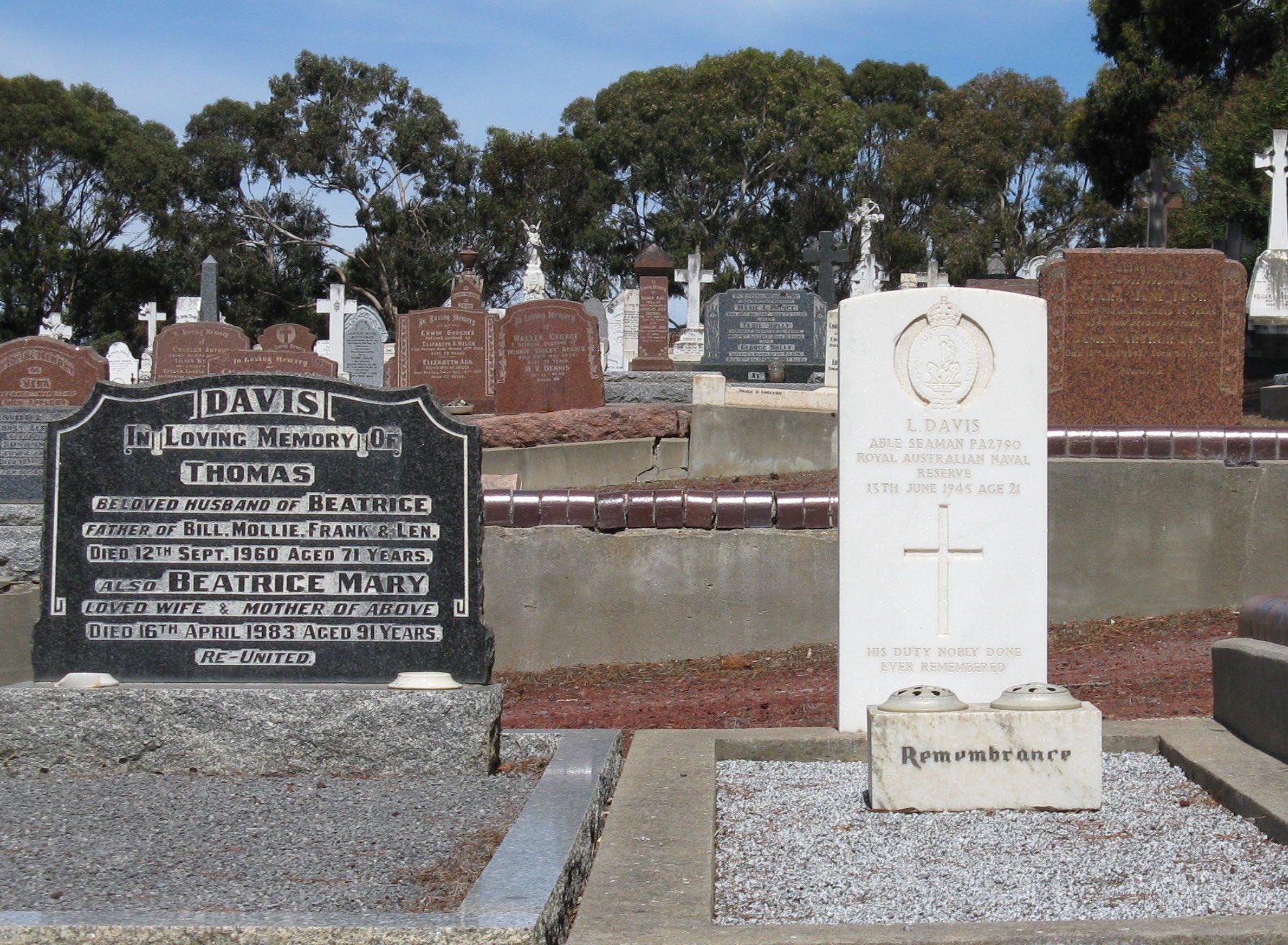 VICTOR HARBOR, June 14. A young man was fatally injured and his two companions were seriously hurt when a bedcot in which one of them was being wheeled was struck by a motor car at Victor Harbor last night. The victims were: Killed Leonard Thomas Davis, 21, of the Royal Australian Navy. Injured John William Fishlock, 16, of Encounter Bay, double compound fracture of both legs and compound fracture of a thigh; Alan Douglas Davis, 21, cousin of Leonard Davis, of Encounter Bay fractured skull. Both are in the South Coast District Hospital. Alan Davis, who has been confined to his bed for more than two years with spine trouble, was being wheeled home in a bedcot by Leonard Davis and Fishlock when the car struck them near the Newland Memorial Church. The car was driven by Peter Percival Plummer, signaller, of the RAN. Alan Davis was almost simultaneously struck by a motor cycle, ridden by Mervyn Johnson, with John Battye as pillion rider. Leonard Davis died two hours after admission to the hospital. He had been in the Navy for three years. Alan Davis began to walk only 10 days ago after spending two years in bed. The Victor Harbor police are preparing a report for the coroner (Mr S D. Bruce).

The Coroner’s report was published in The Advertiser on 5 July 1945:

The Coroner (Mr. S. D. Bruce) found today that Leonard Davis RAN died at the “South Coast Hospital on June 14 from injuries sustained as a result being struck by a car driven by Signalman Peter Plummer, RAN of Currency Creek. He found nothing in the evidence to show that there was any negligence on the part of Plummer and he expressed the opinion that the accident was due to bad visibility and insufficient street lighting at the spot where it occurred.

The fatality occurred when Leonard Davis and John Fishlock were wheeling home Alan Davis, of Encounter Bay, a cousin of the deceased, on a bed cot. Alan Davis, one of the injured persons, had suffered from a back injury for the past three years. They were struck by a motor car driven by Plummer who was, taking three nurses to the South Coast Hospital after they had attended a dance in the Victor Harbor Town Hall. Leonard Davis suffered a fractured skull and other injuries and died early next morning, while Fishlock and Alan Davis received serious injuries. 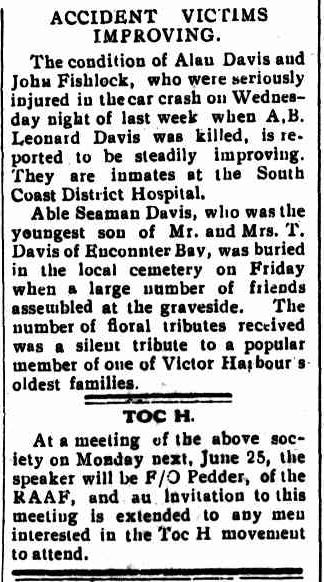