George ARNOLD was born in Manchester, UK on 4 January 1915, the only child of George ARNOLD and Winifred Eva ARNOLD (nee GLOVER).

George’s service file includes his Application for Enlistment; this reveals his education included two years at Stretford Road Secondary School (UK) from age 12 to 14 and then two-and-a-half years at Old Trafford Technical School in Manchester.

His family migrated to Australia circa 1930; they were living at Victor Harbor at the time of George’s enlistment in the RAAF on 4 January 1941; George’s prior included employment as a clerk, transport driver, garage assistant and as a viticulturist, working and living in Renmark. The tenure of his enlistment was the “duration of the war and a period up to twelve months”.

George undertook his basic air cadet training at No 1 Initial training School (ITS), Somers (Vic); he was mustered for training as a wireless operator & air gunner and after training at No 1 Wireless & Air Gunnery School (WAGS) at Ballarat, he advanced to No 2 Bombing & Air Gunnery School (BAGS) at Port Pirie. With his training completed, George was awarded his Wireless Air Gunner’s Badge on 17 October 1941 and promoted to the rank of sergeant. On 25 October George married Florence Milfred Rose WESCOMBE (born at Renmark, 1920) at Victor Harbor.

George embarked from Fremantle for overseas service on 8 November 1941 and trained further in Rhodesia and Kenya. On 26 May, he formed up with his future crew at 70 Operational Training Unit (OTU); George was then posted to 14 Squadron RAF, part of the RAF Middle East Command. On 17 April 1942, he was promoted to flight sergeant, traditionally an automatic promotion after six months as sergeant. After further training, George was posted to No 14 Squadron RAF on 29 June 1942, at that time equipped with Blenheim Mk IV’s. In August, the Squadron was re-equipped with Martin Marauder B26’s, which were used in an anti-shipping role.

Although the original intention was to resume tactical bombing operations in the new aircraft, the Squadron instead found itself carrying out armed torpedo reconnaissance and naval mine-laying sorties over the Mediterranean. On 21st February 1943, at 1245 hours, nine Marauders led by Major Eric Lewis (South African Air Force) took off from RAF Shallufa to attack shipping in the harbour at Melos, but despite the success of this action, this operation was the last time that the Squadron used torpedoes.

It was this mission that George’s aircraft (FK377) was hit by enemy fire, his Marauder was in the second wave.

Two aircraft were hit and failed to return, one of those was seen to crash into the sea whilst the other had an engine on fire. The two planes lost included George’s aircraft and both crews were posted as lost. Flt Sgt BARTON body was later found and was first buried at Adhamas Bay (Milos Island) and in 1946, was reinterred in the Phaleron War Cemetery, Greece. George and the other five crew members have no known grave and are commemorated on the Alamein Memorial, Egypt (below).

The Victor Harbor Times edition of 19 March 1943 reported:
Mr G. Arnold has been advised that his only son, Sgt George Arnold, R.A.A.F., is reported missing in aerial operations in the Middle East. Sgt. Arnold enlisted early in 1941, and left for overseas in November of the same year.
In November 1943, George’s widow was granted a widow’s pension of five pounds and 12 shillings per fortnight. Florence enlisted in the W.A.A.A.F on 30 May 1945 (service number 114850), but served for two monthly only before her demobilisation on 7 August 1945. 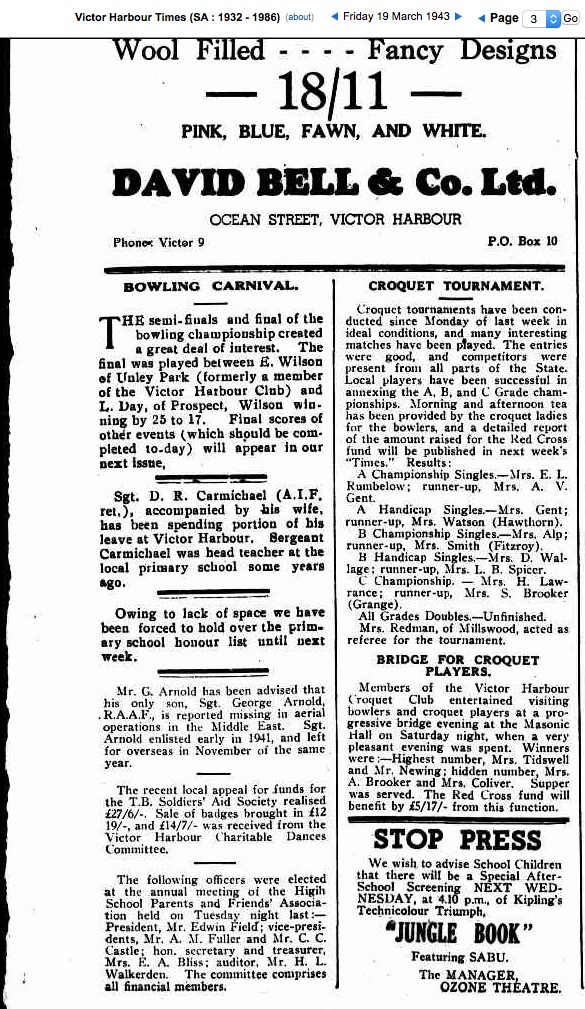 Footnotes:
We are trying to locate the family and a photograph of George ARNOLD. His parents are buried in the Victor Harbor Cemetery.

Normally, there would be an enlistment photograph in the service file, however it was missing and the National Archives was unable to locate it.

References:
Service file of 407760 George ARNOLD purchased from the National Archives of Australia.