Harry Parsons was born at Inman Valley on 22 March 1880, the second youngest of nine children of Thomas Parsons and Mary Parsons (nee Smith) of Inman Valley. Harry was educated for four to five years at the Church of England school (later St Thomas’s Church) at Inman Valley. He farmed with his father on their property, Holowilena, and by the age of 16, when his father retired, was running the farm with his brothers John and Arthur.

Harry enlisted in the SA Mounted Rifles in 1897 and transferred in 1901 to the 16th Light Horse Regiment where he rose through the ranks and was promoted to captain on 1 February 1914. He had been selected in 1913 as an exchange officer and was attached to the 17th Lancers, a top British cavalry regiment serving in India.

Harry enlisted in the AIF on 28 September 1914, shortly after World War One was declared. His enlistment rank was lieutenant (on 9 October 1914 he was promoted to captain and on 1 January 1915, to major). He was posted to the 9th Light Horse Regiment and he played a pivotal role in the Regiment’s training. The 9th moved to Broadmeadows Camp, near Melbourne, to join up with the rest of the 3rd Light Horse Brigade. On 11 February 1915, the Regiment embarked from Port Melbourne aboard three vessels with Major Parsons and his B Squadron aboard Karoo. They arrived in Alexandria, Egypt on 15 March, where the men disembarked and entrained to the Mena Camp.

The 9th Light Horse was ordered to Gallipoli as a dismounted unit and arrived there in late May 1915. Their training could never have prepared them for the death, trauma and illness that would be daily fare in the coming months. Lt-Col Miell, CO of the Regiment, was shot dead while directing the fire of the Regiment. His replacement, Lt-Col Carew Reynell died in an attack on Hill 60 on 27 August. The 9th suffered almost 50 percent casualties. Harry was evacuated from Gallipoli three times due to illness. The third time he was sent back to Egypt for hospitalisation. Harry’s health was precarious and he was ordered back to Australia.

After recuperation at home he pressed the army authorities to allow him to return to the Regiment. On his return to Egypt he was given command of A Squadron in May 1916. The Regiment had been engaged in offensive operations against the Turkish forces and by December 1916, their advance had reached the Palestine frontier where they were involved in the fighting to secure the Turkish outposts of Maghdaba and Rafa. Both of which were captured at bayonet point and about 3,000 prisoners were taken.

The next Turkish stronghold to be encountered was Gaza. The 3rd Light Horse Brigade was involved in two abortive battles to capture Gaza directly (March and April 1917) and then the operation that ultimately led to its fall – a wide outflanking move via Beersheba that began in October.

The 9th Light Horse Regiment fought other notable battles on its route through to Damascus and Tripoli before it returned to Egypt after the war. The Regiment returned to Australia on 10 August 1919. Major Parsons had been awarded a Distinguished Service Order and Mentioned in Despatches by the Commander of the British Army in Palestine, General Sir Edmund Allenby.

Harry Parsons continued his military career after the war, was promoted to Lieutenant Colonel and commanded the 3rd Light Horse Regiment until his retirement in 1926. He continued his grazing pursuits. In 1923, he married Lorna KELLY and they had four children.

During World War Two he was actively associated with the Voluntary Defence Corps and was commander of the southern area. He took considerable interest in civic affairs and served as a councillor on the District Council of Encounter Bay from 1927 to 1948.

Harry Parsons died in 1957, aged 77, and is buried in Victor Harbor Cemetery. 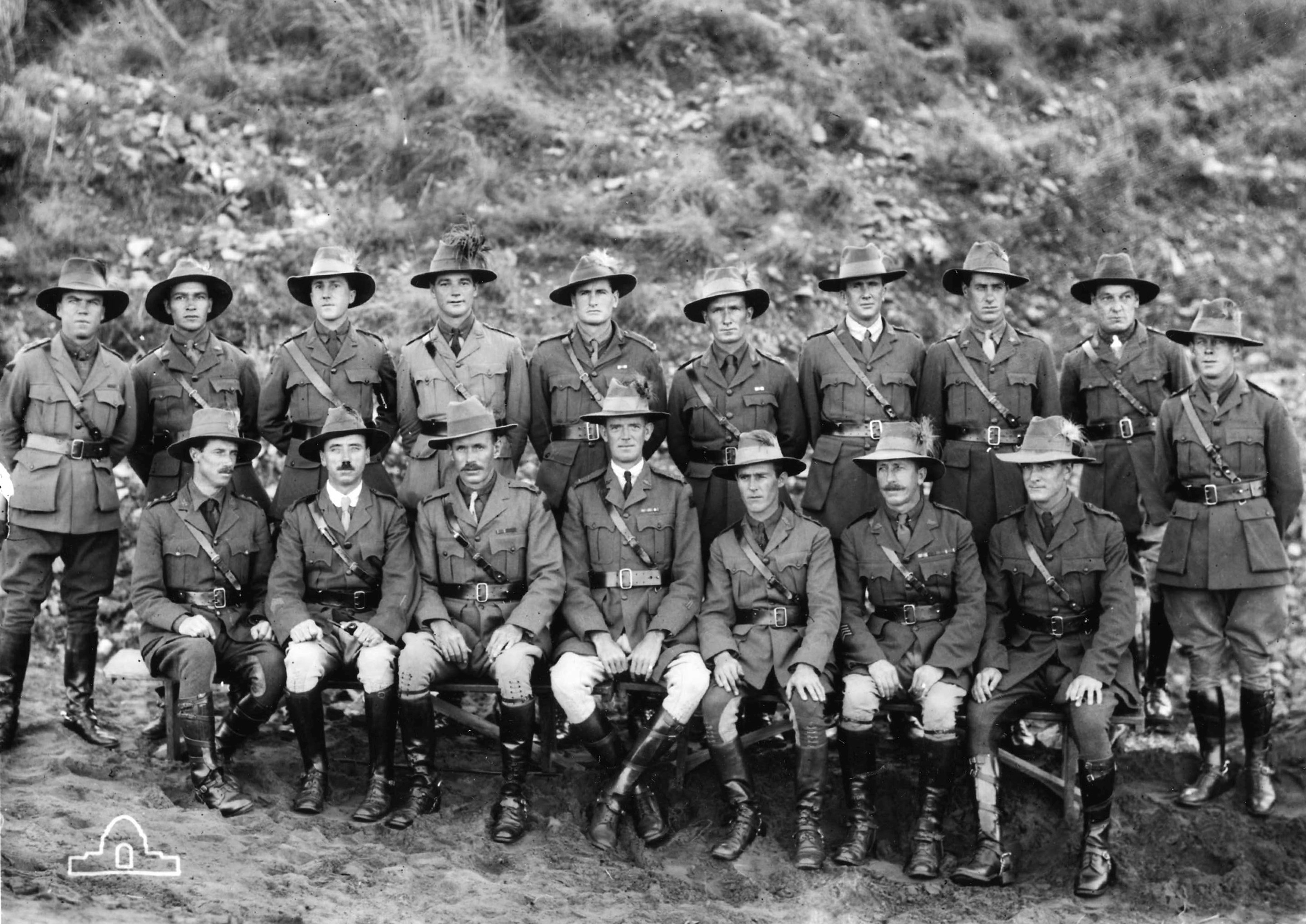 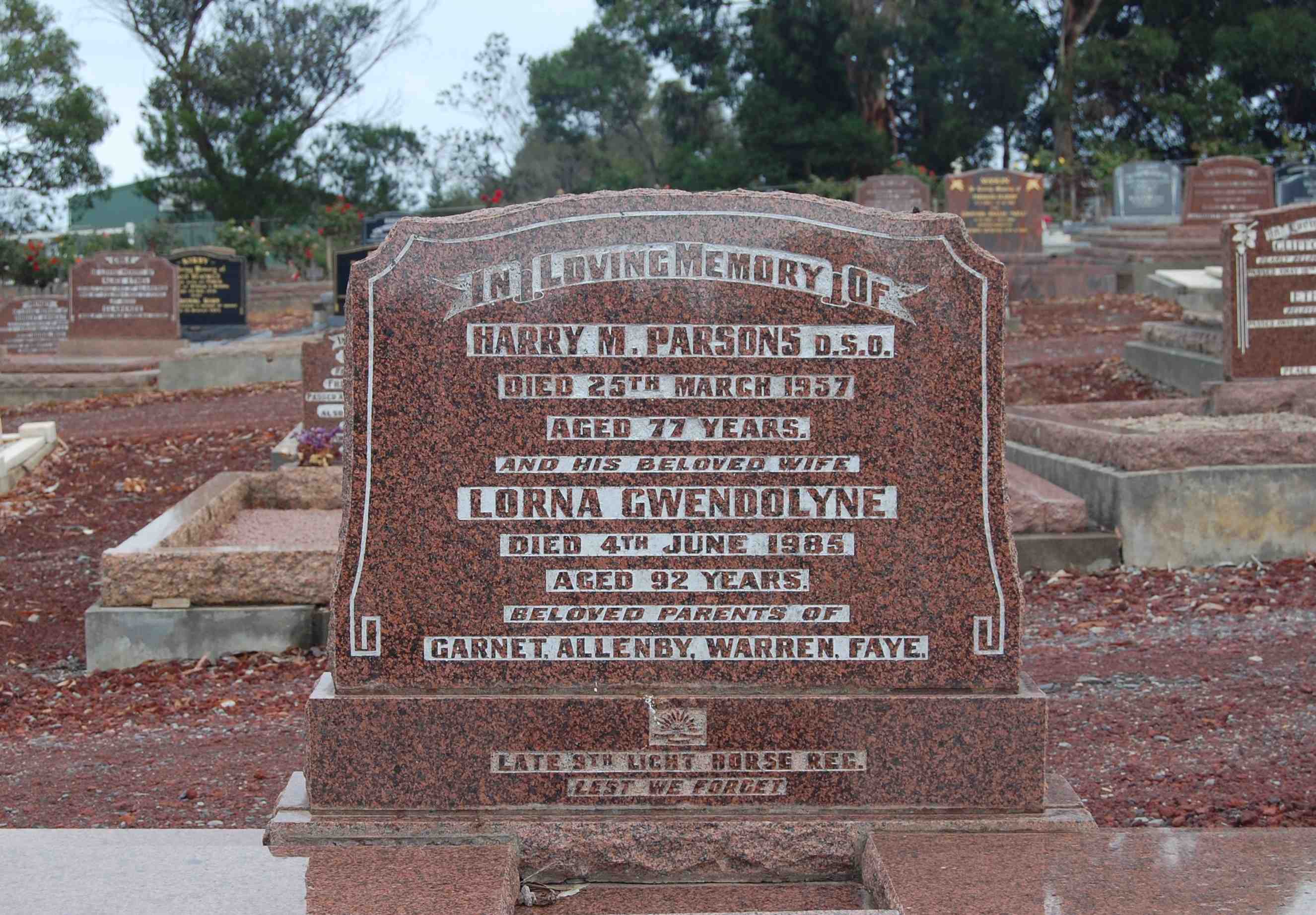