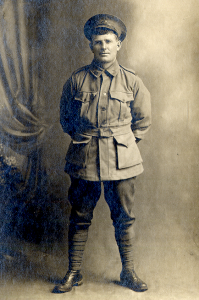 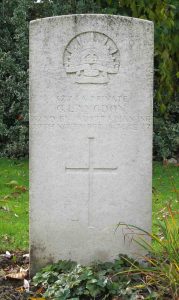 George, the fifth of seven children of James and Annie Langdon, was born at Port Victor on 28 October 1878.  His parents had emigrated from the UK, marrying at Goolwa in 1869 then later living at Encounter Bay and Victor Harbor.

George enlisted in the AIF on 27 November 1915.  He was working as a baker while living at Mile End, Adelaide.  Aged 37, he was older than most men volunteering to join the Army.  Allocated to the 7th Reinforcement group of the 32nd Battalion, he completed his initial training but was delayed by illness before sailing for overseas aboard HMAT Malakuta from Adelaide on 27 June 1916.

The 32nd Battalion was raised at Mitcham on 9 August 1915 with two Companies from South Australia and two from Western Australia.  Sailing for overseas on 18 November 1915, it joined the newly forming 5th AIF Division in Egypt before moving with the Division to France in June 1916.  With only three days of frontline experience, the Battalion was part of the Australian attack at Fromelles on 19 July 1916 where it suffered 718 casualties, nearly 75% of its fighting strength, in its first major battle.  Although it later returned to the frontline, it did not play a major role in any offensives for the remainder of the year.  It was one of four Battalions of the 8th Brigade, 5th Division.

George arrived at Devonport, UK, on 22 August 1916 then to the 8th Training Battalion at Larkhill for further training and conditioning for the frontline from battle experienced instructors.  He arrived in France on 11 November 1916, joining his Battalion on 12 December 1916 at Mametz.  His first time in the trenches near Montauban in mid January 1917 was cut short when he was evacuated to hospital with mumps, not returning to his unit until 2 February in time for follow up operations as the German Army withdrew to the Hindenburg line.

During his time with the Battalion it was in the front line or immediate support for 5-7 days each month with the remaining days spent in unit and specialist training or providing working parties in rear areas.  One period of five weeks was spent making roads.  Conditioning route marches of 20-25 kms were also undertaken.  In June, his Battalion demonstrated its efficiency with D Company winning their Brigade field training competition.  During the Battle for Polygon Wood (Ypres sector) it relieved one of the attacking units in the front line during 27-30 September, suffering 88 casualties.  The Australians had advanced 1,250 yards and captured their objectives.

His Battalion supported frontline units in the Messines sector from 22-28 November 1917.  Billeted at Wulverghem, it provided working parties carrying stores and improving the front line system.  On 27 November, the day George Langdon was killed, the frontline 29th Battalion reported conditions as “rainy and misty causing trenches to collapse in several places”.  He had become one of many casualties suffered by working parties.

Further adding to his family’s grief, his few remaining personal possessions were lost on their way back to Australia when the ship carrying them was torpedoed and sunk in July 1918.

His family received George’s British War Medal and Victory Medal while his father was granted a pension of 15 shillings a fortnight in February 1918 for the loss of his son.

After the war George was re-interred at La Plus Douve Farm Cemetery, near Wulverghem, Belgium, being one of 86 Australians among the 345 men buried there. 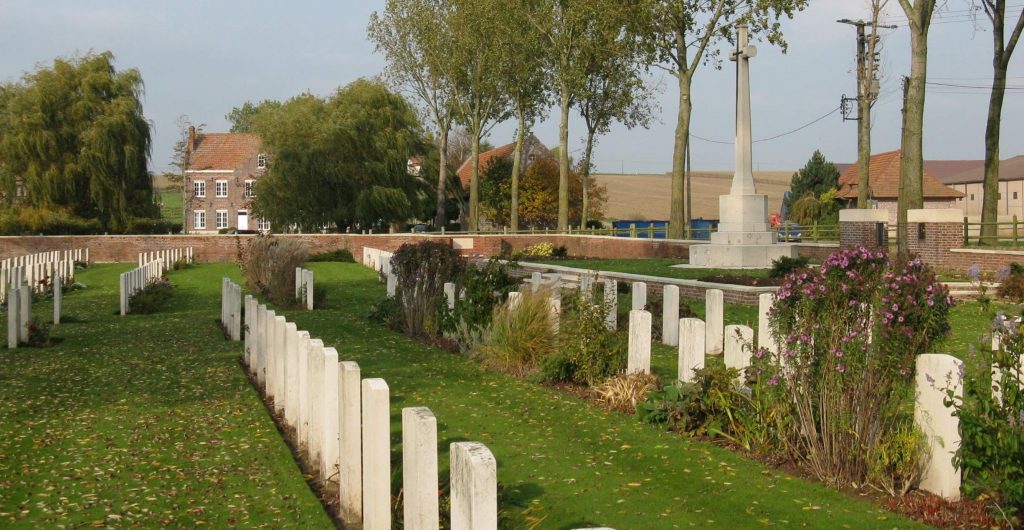 The studio portrait of Pte George LANGDON was taken prior to his embarkation overseas on 27 June 1916; the photographer was Geo. A. Rogers of 138 Rundle Street, Adelaide. This digital image was purchased from the South Australian Archives.
The photographs of Pte LANGDON’s grave and the war cemetery La Plus Douve Farm Cemetery in Belgium were taken by Victor harbor RSL members Ian & Janet MILNES on 13 October 2008.
Service record of Pte G LANGDON held by the National Archives of Australia (www.naa.gov.au).
Australia War Memorial, 29th and 32nd Battalion War Diaries (www.awm.gov.au).
Passchendaele – the untold story, Prior & Wilson, Yale University Press, 1996.
Compiled by the Victor Harbor RSL History Research Team (March 2009).