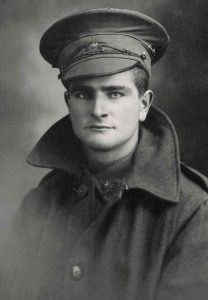 Studio portrait of 3652 Pte Clifford Ivo GROSVENOR taken prior to his embarkation overseas, the photographer is unknown. All photographs are from the Brenda GROSVENOR family collection unless otherwise specified. Brenda is the daughter-in-law of Cliff; her late husband was Peter GROSVENOR.

Clifford Ivo GROSVENOR was born at Victor Harbor on 19 August 1898, the eighth of ten children of Archibald Thomas GROSVENOR and Prudence GROSVENOR (nee Prouse). He was educated at the Inman Valley and Victor Harbor public schools and joined the senior cadet scheme in 1910 and was still a student when he enlisted in the AIF on 15 May 1917, age 18. His older brothers Sydney John and James Arthur had already enlisted in the AIF and were serving in France. Cliff, as he was known, was under the age of 21, and required his parent’s written consent to serve abroad, and this was given conditional that Cliff serve in the army medical corps.

He was given the serial number 3652 and posted to D Company at the Mitcham Base Training Depot. On 16 July, Pte GROSVENOR was posted to the 10th Reinforcements, 50th Battalion. The reinforcement unit embarked from Melbourne aboard the HMAT A32 Themistocles on 4 August 1917. The embarkation roll reveals Pte GROSVENOR’s daily rate of pay was five shillings and all enlisted men received an additional one shilling per day, to be paid on completion of their overseas service. The Themistocles berthed in Glasgow on 2 October and the troops entrained to the sprawling Australian base at Codford on the Salisbury Plains where further training followed.

On 30 January 1918, Pte GROSVENOR embarked at Southampton and disembarked the next day at Le Havre, France. He reached the 50th Battalion at its base area near Ridgewood Camp, on the Belgium front near Ypres (Ieper), on 9 February. His first days at the Battalion were spent working in fatigue parties in the forward area. At the end of March 1918, the Germans launched a major offensive on the Western front and the 50th Battalion was one of the many Australian units rushed from Belgium to help repulse the enemy offensive.

On 24 April, orders were received to move the Battalion to Blangy Wood and after reconnaissance was carried out the 50th moved to their objective, arriving there at 1600 hours. Their jumping off point for the attack was about 2,500 yards forward of Blangy Wood and further reconnaissance was carried out. At 2130 hours the Battalion started to move forward with the 52nd Battalion in the lead, the 51st Battalion following and the 50th taking up the rear. Heavy enemy machine gun fire from the flanks inflicted casualties amongst the troops as they continued to advance. The soldiers came across barbed wire barriers, which hindered their advance, and they had to pass these as the enemy fire continued to rake their ranks. At about 1200 hours, the Battalion was ordered to advance and take Monument Wood, however the machine gun fire was from the enemy was so heavy the soldiers could not leave their trenches. By the morning of 27 April 1918, the fighting strength of the Battalion in the front line was down to 237 men. The casualties for the action 24-27 April were heavy – 50 soldiers had been killed, 189 wounded and 15 were missing.

Cliff’s service with the Battalion continued until the end of the war and during this time he was engaged in a number of actions including raiding patrols and reconnaissance parties.

Cliff embarked from England for repatriation to Australia on 7 May 1919 aboard the HT Leicestershire, disembarking at Port Adelaide on 18 June. After one month’s leave he was demobilised on 18 July 1919. He later married Lillian ARCHER and there were four children of the marriage. Their sons, Robert and Peter, both served in the RAAF during World War Two.  Robert was killed in a flying accident in Ayreshire, Scotland, on 29 March 1944.

During World War Two, Cliff enlisted in the army and served in New Guinea; after the Japanese surrender, he served with the British Commonwealth Occupation Force (BCOF) in Japan. Cliff attained the rank of Warrant Officer Class 2. Just after his return to Australia, he suffered an accidental head injury on 26 May 1947 and died in hospital a few hours later. Clifford Ivo GROSVENOR is buried in the Sydney War Cemetery.