Milo Massey Cudmore was born at Avoca Station, on the River Murray, near Wentworth, New South Wales on 2 May 1888. He was the third child of successful pastoralist and businessman Daniel Henry Cashell Cudmore and wife Martha Earle Cudmore (nee McCracken).

In 1899, Daniel Cudmore purchased a property and cottage at Victor Harbor, which had originally belonged to the first Governor of South Australia, Governor Hindmarsh. Cudmore progressively converted the cottage to a mansion, and named it Adare after the old family home in Ireland. To escape the depressing summer heat and swarms of flies at Avoca Station the family would travel down the Murray River by paddle steamer to Goolwa and then by coach to the home at Victor Harbor.

Milo was educated at St Peter’s College in Adelaide, where he was a good student, keen on sport and participated in numerous intercollegiate competitions. He then attended Magdalen College at Oxford where he studied for his Bachelor of Arts degree. He rowed bow in his St Peters College eight, which was head of the river, and then won the Grand Challenge Cup at Henley on Thames in 1910.

In March 1910, while at Oxford, Milo enlisted in the British Army and served with the King Edward’s Horse Regiment but the following year was discharged at his on request as sergeant on 1 December 1911. At the outbreak of war he left his station in Western Queensland to re-enlist in the British Army. On arrival in England he submitted an application to join the Royal Field Artillery at Oxford and received a commission as a temporary second lieutenant on 12 January 1915 and was promoted to lieutenant on 1 January 1916.

His service in France and Flanders commenced on 23 July 1915. Shortly after arriving at the front Milo became the Divisional Trench Mortar Officer with the 31st Trench Mortar Battery, a unit attached to the British 9th Brigade, 3rd Division, which was then fighting in the Menin Road sector at Hooge and Bellewarde. Milo was wounded in action on 12 August 1915 and later mentioned in despatches. On recovering from his wounds he took up duties with the 24th Trench Mortar Battery and was again mentioned in despatches on 1 January 1916. He was awarded the Military Cross on 16 January 1916.

In mid-February 1916, the Germans increased their activities in the Ypres Salient by exploding a number of mines and then conducted a series of infantry attacks. They attacked north of Ypres and for a brief period captured the extreme left of the British line and a narrow ridge about twelve metres high on the northern bank of the Ypres-Comines canal known as “The Bluff”. At 4.29 am on 2 March 1916, following several days of artillery barrages, the British 3rd and 17th Divisions attacked the German line and regained the whole of the front lost on 14 February.

They continued fighting in the Ypres Salient and when the 3rd Division conducted an attack on 27 March 1916, to straighten the line at St. Eloi Craters, Lieutenant Milo Cudmore MC was killed in action. He was buried in the field but his grave was later lost, as so were many others as the tide of battle changed rapidly. He was 28 years at the time of his death. Lt Cudmore MC is commemorated on the Menin Gate Memorial (Panel 5 and 9) along with the 55,000 names of Commonwealth forces with no known graves, who died in the Ypres, Belgium area.

Milo’s brother Collier Robert Cudmore served in the Royal Field Artillery and commanded a field battery. He was twice wounded but returned to duty and was repatriated to Australia in 1919. Post-war he board positions on a number of South Australian companies and in 1933, was elected to the Legislation Council until his retirement in 1959. 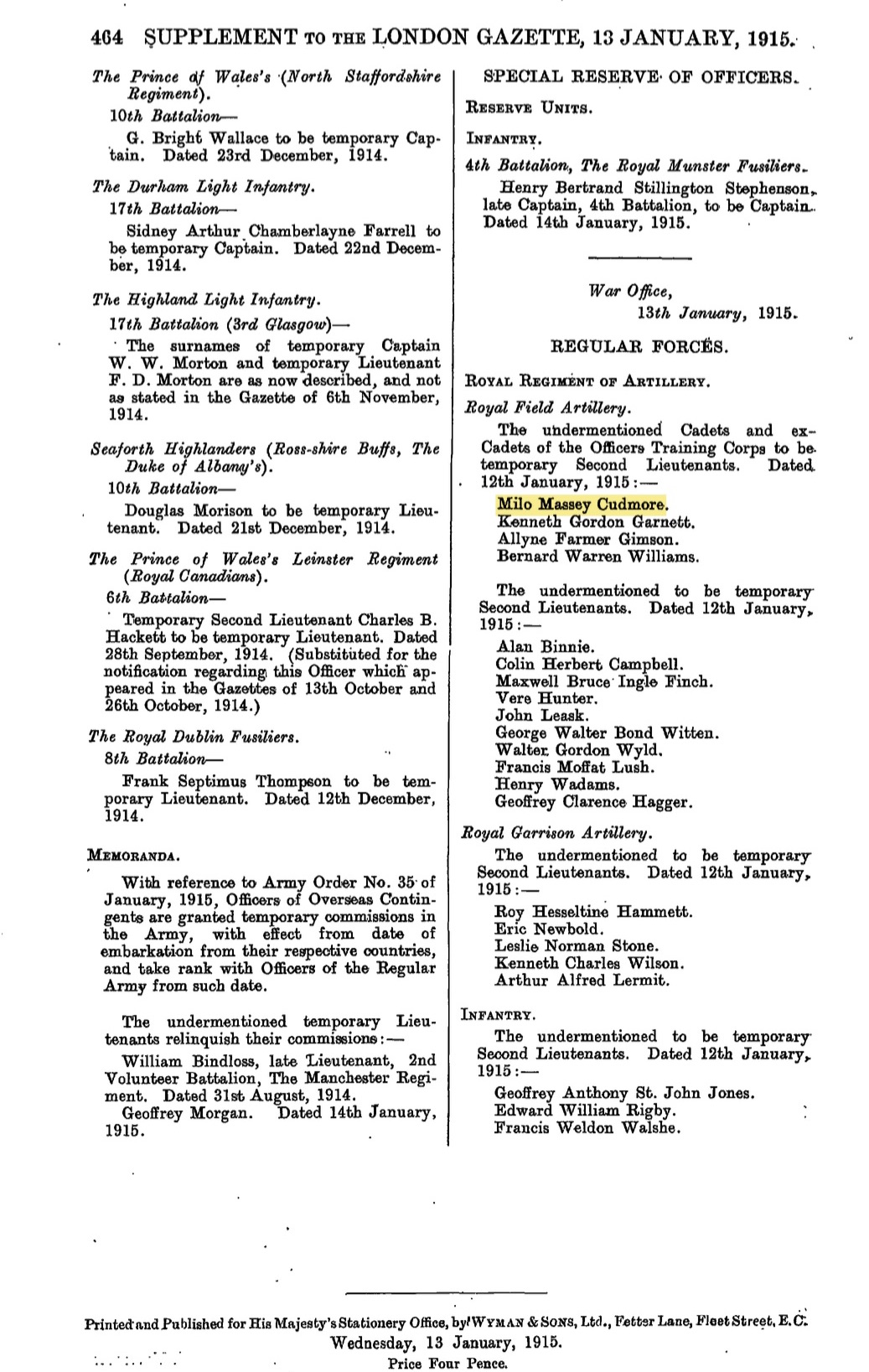 The extract from the London Gazette, edition of 13 January 1915 recording Milo’s commission.