William Hawden Ayliffe was the third of nine children of Frank and Elizabeth Hamilton (nee Davison). He was born in 1892 at Silverton, NSW. His family had moved to Myponga where Frank worked for the Zinc Corporation, either as an engineer or manager. James and Frank both joined the Light Horse, serving together at Gallipoli, then in Egypt, until May 1916, when Frank transferred to Artillery for the remainder of the war. James, still with the 3rd LHR, was fatally wounded near Beersheba, Palestine, on 7 November 1917.

William enlisted on 15 September 1916 at the age of 23. Following initial training at Mitcham, he sailed with the 19th Group of Reinforcements intended for 27th Infantry Battalion onboard HMAT A28 Miltiades from Adelaide, on 24 January 1917. After nine weeks at sea, the AIF passengers disembarked at Devonport, England, on 27 March 1917. William then travelled to the 7th Training Battalion at Rollestone, Salisbury Plains, for further training from battle-experienced instructors.

Four months later William was transferred to France then to the 50th Battalion at Kemmel on 7 August 1917, instead of his original unit. His next two weeks were spent as a member of working parties salvaging battlefield debris or on construction work. The Battalion then went forward at Ploegsteert Wood in Belgium where, fortunately, it only suffered 14 casualties during its ten days in the front line.

William must have quickly displayed leadership potential for he was promoted to Lance Corporal on 16 September while his Battalion trained and rested. Ten days later it was part of the attack on Zonnebeeke Ridge, which commenced at 5.50 am on 26 September 1917. The unit’s advance was across a 585 metre wide front continuing forward to a depth of 685 metres, which it achieved, then dug new defences. The Battalion was relieved after 24 hours strenuous action having lost 35 killed and 143 wounded.

October 1917 saw William’s unit in the frontline at Broodsneide Ridge between 10th -19th where it was shelled daily. Despite the shelling, the men repaired a railway and completed barbed wire defences while maintaining forward patrols up to 460 metres from their posts. Of the 534 men who began that period, 43 were killed, 100 wounded and 29 reported sick over the ten days. In mid-November William was promoted to Corporal.

These actions were part of a series of eleven great British attacks made between July and November 1917 in what was then called Third Battle of Ypres but now is more commonly known as the Battle of Passchendaele. Australian soldiers were at the forefront of five of those attacks.

Most of December 1917 was spent resting and preparing for the coming year. On the 11th December, members of the Battalion cast their votes in the Commonwealth Referendum on Compulsory Service Outside Australia. This referendum to introduce conscription was defeated. Christmas Day was spent at Moislains, where Christmas dinner was embellished with treats purchased from funds donated by the League of Loyal Women of Adelaide.

During the months of January-March 1918, the Battalion spent periods in the frontline or supporting the frontline north of Hollebeke then later at Henencourt. Through March and April 1918, the Allied Armies were forced back by the German spring offensive. On 5 April, the 50th Battalion, with other AIF units at Dernancourt, successfully stopped the largest German attack ever mounted against Australian troops during the war.

On 25th April 1918, the 50th Battalion, with five other Australian Battalions, began a moonlight encirclement of Villers-Bretonneux, which led to the recapture of the village. During the attack William was among the many of his unit killed by heavy German machine gun fire.

Unfortunately his body was not found after the fighting. William is one of 10,885 Australians killed in France who have no known grave. Their names appear on the walls of the Villers-Bretonneux Memorial. Many other members of his Battalion killed that day lie in the military cemetery adjacent to the Memorial. His family later received William’s British War Medal, Victory Medal.

William is commemorated on the Victor Harbor War Memorial and had a memorial plaque affixed to a Norfolk Island pine on Flinders Parade, Victor Harbor. 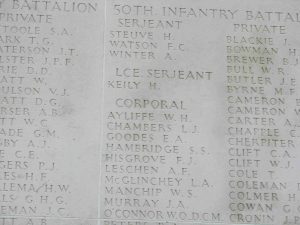 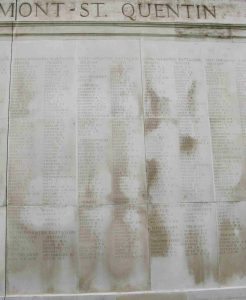