James Hamilton AYLIFFE was the second child of Frank AYLIFFE and Elizabeth Hamilton AYLIFFE (nee DAVISON), was born in January 1891 at Silverton, NSW. James’ service file indicates his parents were living in Broken Hill at the time he enlisted and moved to Myponga in late 1916 or early 1917 where Frank AYLIFFE worked for the Zinc Corporation Mill managing the timber plantation, which produced timber beams for the mines.

Three AYLIFFE brothers served in the AIF. James and Frank both joined the Light Horse, serving together at Gallipoli then in Egypt, until May 1916, when Frank transferred to artillery and survived the war. William was killed in action at Villers-Bretonneux on 25 April 1918 while in the infantry.

James enlisted on 19 August 1914, soon after war was declared. Following initial training at Morphettville, he sailed with the 3rd Light Horse Regiment onboard HMAT Port Lincoln from Adelaide on 22 October 1914 and disembarked in Egypt for further training.

The 3rd LHR was committed to the Gallipoli campaign as a dismounted unit on 9 May 1915, to relieve infantry units, which had suffered heavy causalities in the early fighting. The Regiment played a defensive role throughout the campaign. Apart from six days when ill in hospital (12-17 September), James remained on duty with his unit at Gallipoli until it was evacuated on 14 December back to Egypt.

On 29 December 1915, James was promoted to lance corporal and on that same day the 3rd LHR was deployed to the western area of the country until May 1916, as a component of the force protecting the Nile Valley from pro-Turkish Senussi tribesmen. On 26 March 1916, James was court-martialled for absenting himself from the camp without permission. He was sentenced to 28 days field punishment and reduced to the rank of corporal.

James was promoted to corporal on 2 July 1916 following the promotion of 334 Corporal Clarence Garland Plenty to the rank of sergeant. Despite James’ earlier misdemeanour, his superiors regarded him as a good horseman and junior leader. The Regiment, now in the Sinai, fought in the Battle of Romani on 4 August 1916. This battle stopped any further Turkish advance towards Egypt.

On 23 December 1916, following an overnight march, British forces attacked Turkish held Magdhabba. The 3rd LHR, aided by two companies of the Camel Brigade, attacked a key strong point on foot, overcoming heated resistance, to capture it and 95 defenders. That attack broke the enemy defences, leading to the surrender of nearly 1,300 prisoners and significant quantities of munitions. Throughout the campaign in the Sinai, plans and tactics revolved around the location and availability of water for both men and animals.

After resting, his Regiment rejoined the Anzac Mounted Division, which continued pressuring the Turkish Army across the Sinai then onto Palestine. On 9 January 1917, after another all night-ride, British forces surrounded the 2,000 Turkish defenders south of Rafa. James became one of a number of casualties suffered by the 3rd LHR in its advance on Turkish positions. Shot in the right arm, he was admitted to the Australian General Hospital in Egypt five days after being wounded. Following recovery and convalescence, he was posted to the 1st Light Horse Training Regiment on 22 February 1917.

James rejoined the 3rd Light Horse Regiment in early May, at el-Shellal, in time to be part of the large demolition raid which destroyed 13 miles of Turkish railway line south of Beersheba. His experience, skills and leadership were recognised with promotion to sergeant on 8 July 1917.

On 31 October 1917, the 3rd LHR fought at Battle of Beersheba. It was attacking Turkish defences from the east, while the famous charge of the southern trenches was made by the 4th LHR and 12th LHR. Their charge collapsed the defences, allowing Beersheba to be captured.

Seven days later, as the Regiment was moving ahead of the main British forces advancing towards Tel-el-Sheria, James was wounded by rifle fire early on the morning of 7 November. Although immediately attended to by a medical orderly, he died later that day. Tel-el-Sheria was captured later in the day by British infantry.

James was buried close to the station south of the settlement. After the war he was reinterred in the Beersheba War Cemetery, Palestine. His family received James’s 1914-15 Star, British War Medal, Victory Medal. He is commemorated on the Victor Harbor War Memorial. 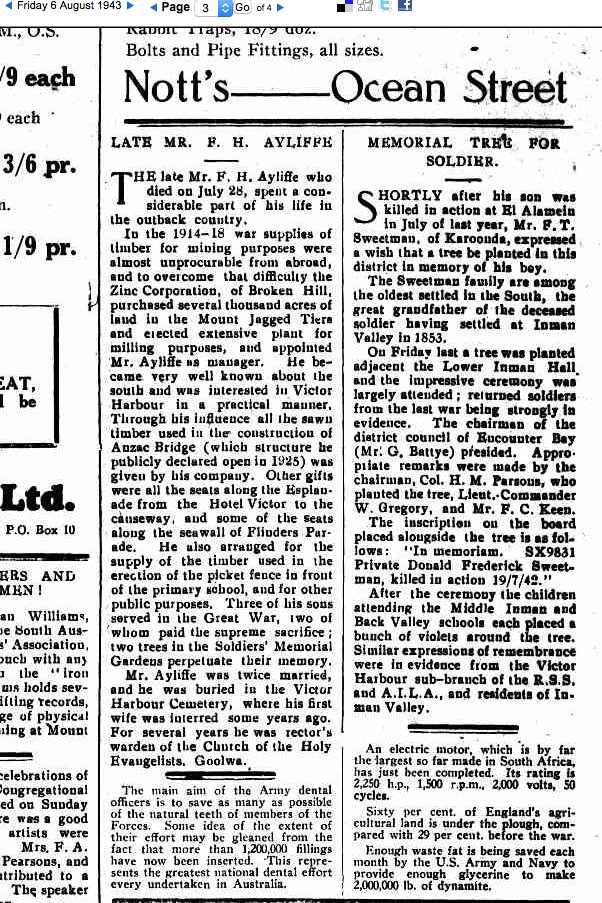