Harry was born at Victor Harbor on 18 August 1910, the eldest of three children of William James ARMSTRONG and Maude Kathleen ARMSTRONG (nee NIELSEN). On 8 August 1033 he married Veronica Ruth HALLION; they had was one child when Harry enlisted in the RAAF on 5 November 1940. At this time we do not have a copy of his service file for detailed information about his service. We do know he served overseas in the Southwest Pacific campaign. At some time he was promoted to corporal, but the National Archives of Australia index indicates a court martial took place at No 4 Initial Training School (ITS), Mt Breckan, Victor Harbor in August 1944 and his rank was reduced to Leading Aircraftman (LAC).

Harry served his remaining time in the service at the School of Administration and was demobilised on 5 November 1945. He died on 13 January 2004. 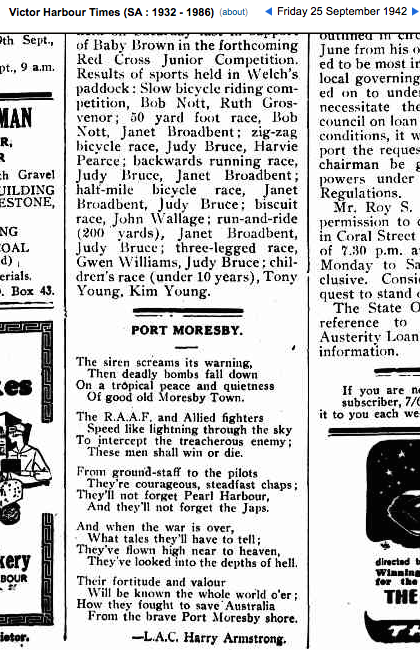