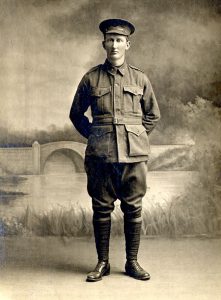 Frederick William Clair ADEY was born on 8 December 1893 at Inman Valley, South Australia, the youngest of three children of John ADEY and Eva May ADEY (nee Miller). He was educated at the Victor Harbor public school and prior to his enlistment was employed as a farm labourer.

Clair, as he became known, enlisted in the AIF on 5 May 1916 and after his basic training was posted to the 3rd Reinforcements, 43rd Battalion. He embarked from Adelaide on the ship HMAT A68 Anchises on 28 August 1916 and arrived at Plymouth, England on 11 October. Further training was undertaken at the large Australian Base Depot on the Salisbury Plains and on 11 November, Private ADEY was transferred to the 37th Battalion.

On 22 November 1916, the 37th Battalion embarked from Southampton and disembarked at Havre, France the next morning. Three days later the Battalion took up positions in the frontline trenches near Armentieres.

The northern winter of 1916-1917 slowed down operations by both sides as men were confronted by snow, rain and freezing temperatures. Small raiding parties were carried out, but their objectives were limited to the gathering of intelligence and capture of prisoners. Frostbite and trenchfoot caused a significant number of casualties amongst the troops. Melting snows turned the trenches and roads into mires of mud and slush and restricted movement by vehicles and pack animals.

Artillery shelling by each side continued and the casualties steadily mounted. By 26 January 1917, the Battalion had moved to La Chapelle d’Armentieres where they took up positions at Spring Post to relieve a British regiment. No sooner had they taken over the position when enemy shelling hit the Battalion’s headquarters and destroyed two field guns and killed one soldier.

On 28 January 1917 a large composite raiding party, comprising eight officers and 216 other ranks, was assigned the objective of capturing the first, second and third line of enemy trenches in front of the Battalion. The raid met with some success. After the raid on 1 February, Pte ADEY was promoted to Lance corporal and 2IC of his platoon section.

Enemy artillery shelling continued into February. On the 23rd, a particularly heavy barrage against the Battalion’s front trenches wounded six soldiers. The attacking Germans penetrated the Battalion’s parados (the mound behind the trench) but were repulsed leaving three dead and two wounded behind.

A raid by elements of the Battalion on 27 February against the enemy front trench resulted in 17 prisoners, one machine gun, one searchlight and some medical equipment being captured, two minenwerfer emplacements were destroyed whilst the Battalion’s casualties were recorded as being slight. Lcpl ADEY was wounded in the action and evacuated suffering gunshot wounds to the head and right shoulder. He was later transferred to the 13th General Hospital at Boulogne and on 9 March, was evacuated to England.

Lcpl ADEY’s wounds confined him to hospital and although he eventually recovered, he never returned to his Battalion and the frontline.

On 27 July 1917, Lcpl ADEY embarked on the HMAT A164 Demosthenese for the journey home to Australia and arrived at Port Melbourne on 24 September 1917, where he entrained to Adelaide. Lcpl ADEY was demobilised on 29 October 1917.

The studio portrait of Private Frederick William Clair ADEY was taken c. June-July 1916. The photographer was Geo. A. Rogers of 138 Rundle Street, Adelaide. This digital image was purchased from the South Australian Archives.