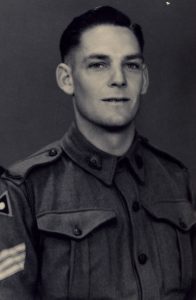 George was born in Hobart on 11 September 1914. He enlisted in the 2nd AIF on 9 January 1941 and after basic training, was posted to the 2/4th Casualty Clearing Station. The unit, part of the 8th Aust Division, embarked for Singapore in Feb 1941. On 8 December 1941, Japanese forces advanced down the Malayan Peninsula and the 2/4th was overburdened with the wounded. George became a POW after the surrender at Singapore on 15 February 1942. He was sent to Moulmein (Burma) and slaved on the notorious Death Railway. George was liberated in late August 1945, repatriated to Australia and demobilised on 9 January 1946. George was later awarded the British Empire Medal for splendid service to his fellow POWs; at the time of the promulgation of his award on 1 January 1952, George held the rank of Warrant Officer Class II (temporary). He and his wife Iris moved to Victor Harbor in 1996. George was a member of the Victor Harbor RSL.

George died on 26 May 2006 at Victor Harbor and is buried in the Scott Creek Cemetery, South Australia.

The following obituary was published in RECORD, the official journal of the South Pacific Division Seventh-day Adventist Church, edition of 8 July 2006. Volume 111, Number 26:

Adderton, George William, born 11.9.1913 in Hobart, Tas; died 26.5.06 at Victor Harbour, SA. On 23.1.46 he married Iris (nee Scragg). He is survived by his wife (Victor Harbour); his sons, David (Adelaide, SA) and Gary (Hobart, Tas); his six grandchildren; and one great-grandchild. George lived a life of service to others, serving 17 years in the medical corps of Australian Defence Forces, five of which were in active service for which he received a British Empire Medal; and three-and-a half of which he was a prisoner of war. Later he gave 10 years of volunteer work to ADRA, working in Nepal. He now peacefully waits for Jesus to return. Allan Croft 8 July 2006. 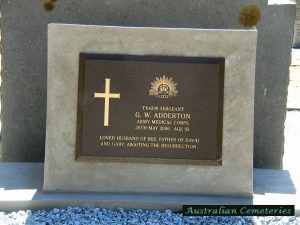