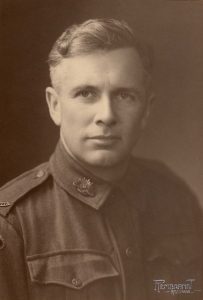 Colin was born in Unley on 30 June 1905, the third of four children of Henry Robert George ADAMSON and Jessie Mary ADAMSON (nee McFARLANE).

He was educated at Walford School (1912-1913) and Prince Alfred College (1914-1921). After leaving school, Colin worked as a clerk at the Adelaide Steamship Co Ltd head office in Currie Street (1922-1924), followed by two years as a clerk at car manufacturer Duncan & Fraser Ltd then switching to pastoral employment when he joined Mutooroo Station (1927-1930), Lilydale Station (1931-1933), followed by another stint at Mutooroo (1933-1935) and then again at Lilydale from December 1935 until his enlistment in the 2nd AIF on 3 July 1940, at the age of 35. Prior to this Colin had served 11 months with the 9/23rd Light Horse Regiment. Just two weeks prior to his enlistment, Colin married Bronwyn Olive COOK, on 22 June 1940, at the Stow Congregational Church, Adelaide.

After basic training, Colin was posted to the 9th Division Cavalry Regiment. The Regiment, which was part of the 9th Australian Division, embarked for the Middle East on 10 April 1941, aboard the SS Île de France. Shortly after their arrival in May 1941, the Regiment went into action against the Vichy French in Syria. The Regiment was equipped with Crusader tanks and at this time Colin was promoted to corporal and became a tank crew commander.

From the Australian War Memorial:

The Syrian Campaign is one of the least-known Australian operations of the Second World War. Between 7 June and 11 July 1941, Australian troops, principally from the 7th Division, fought as part of an Allied force in Syria and Lebanon against the Vichy French. Syria and Lebanon had been French protectorates since France was granted a League of Nations mandate over them in 1919, and a pro-German Vichy French administration had assumed control following the fall of France in June 1940.

The aim of the campaign was to occupy Syria and Lebanon to prevent the establishment of a German presence there that could threaten Britain’s bases in Palestine and its broader strategic position in the eastern Mediterranean. German aircraft had already operated from Syrian airfields in April 1941 in support of a revolt against the British administration in Iraq. The campaign was timed to take advantage of the losses suffered by the German forces during their invasion of Crete. Unbeknown to the British Government, however, Germany had suspended any further operations in the eastern Mediterranean, in order to prepare for the invasion of the Soviet Union.

The plan developed by British General Henry Maitland Wilson, commanding the expedition, involved a three-pronged advance. The 21st Australian Brigade would advance north, from Palestine, along the Lebanese coast, with Beirut as its objective. The 25th Australian Brigade would head for Rayak, the site of a large airfield, along an inland route. Even farther to the east, the 5th Indian Brigade and a Free French Force would march on Damascus. Once these three objectives were attained, phase two of the operation – an advance on Tripoli, Homs, and Palmyra much further to the north – would commence. The Allied land forces were to be supported both by gun fire from naval vessels offshore and several air force squadrons, including the RAAF’s 3 Squadron.

The invasion began on the night of 7 June, in the ill-informed hope that the Vichy French would offer only token resistance. This was not to be. The Vichy French resisted stoutly and skilfully along all three of the Allied routes of advance. On the coastal sector, fierce fighting occurred at the Litani River on 9 June; progress thereafter was slow but steady, with Sidon being occupied on 15 June. On the central route, Merdjayoun was captured on 11 June. Precipitous terrain, however, made a rapid advance a doubtful prospect, and on 12 June it was decided to transfer the bulk of the forces there to take part in the coastal advance, via a mountainside route that passed through Jezzine. The most rapid progress was made by the Indians and Free French towards Damascus.

On 14 June, the Vichy forces launched a counterattack that struck at the lines of communication of both the 25th Brigade and the Indian and Free French force before Damascus. They recaptured the towns of Ezraa, Kuneitra and Merdjayoun, but by 18 June the situation had been restored, with all but Merdjayoun back in Allied hands. The Allied emphasis then switched to the capture of Damascus, which fell on 21 June. On that day a mixed force of British troops, including those of the Arab Legion, entered Syria from Iraq and advanced on Palmyra. The British attacked Palmrya on 25 June, but the Vichy forces kept the British at bay for nine days before surrendering.

After the capture of Damascus, the (mainly Australian) drive on Beirut became the Allied main effort. Pressure was maintained around Jezzine by the 25th Brigade, while the 21st, reinforced by the 17th Brigade from the 6th Division, drove north along the coast. The climactic battle of the campaign was fought to secure Damour between 5 and 9 July. There was little progress in the Western sectors. Attention was then concentrated on the Jezzine and coastal areas. British forces headed north to Beirut, with the Australians capturing Damour on 9 July. On 10 July, with the Australians within 10 kilometres of Beirut, the capital of Lebanon, the British 4th Cavalry Brigade closing on Homs, and the 10th Indian Division having advanced into northern Syria from Iraq, the Vichy French Commander, General Henry Dentz, sought an armistice. A ceasefire was arranged to begin at one minute after midnight on 12 July 1941; two days later, the armistice was signed at Acre.

Australian casualties during the fighting in Syria and Lebanon numbered 416 killed and 1,136 wounded. Approximately 1,000 Vichy French troops were killed throughout the theatre.

As the war in the North Africa continued and German armour became stronger, the regiment was equipped with Crusader cruiser tanks, Stuart light tanks, and machine-gun carriers. By July 1942 the situation had become critical for Allied forces as German and Italian troops had reached El Alamein, in Egypt. The 9th Division was consequently rushed to the Alamein “box” and held the northern sector for almost four months as the 8th Army was reinforced for a new offensive.

Two of the regiment’s squadrons provided protection for 9th Division headquarters, while in September the regiment supported the 2/15th Battalion’s raid during operation “Bulimba”. During the main Alamein offensive at the end of October the regiment was held in reserve and did not play a large role in the fighting. However, once the breakthrough was made on 3 November, the regiment’s crusaders led the coastal advance and reached El Daba the same day, before being withdrawn.

Alamein was a great, although bloody, success for the Allies and by 6 November enemy forces were retreating. But the 9th Division was needed elsewhere.

During this time Colin was evacuated to the 7th Australian General Hospital on 11 September 1942 suffering from malaria, he returned to his unit on 22 October. On 24 January 1943, the 9th embarked from Suez aboard the Queen Mary for return to Australia, the Australians were now needed to fight the Japanese in the South-west Pacific campaign. On 31 March 1943, the Regiment marched through the streets of Melbourne in a ‘welcome home parade’. Regrouped as the 2/9th Cavalry Commando Regiment, the men underwent intensive jungle training in the Atherton Tablelands, north Queensland. On 16 December 1943, Colin was evacuated to the 121st Australian General Hospital, suffering from severe psoriasis. In February 1944, Colin was medically reclassified as unfit for further active service. He was discharged on 11 February 1944.

In June 1944, Colin took up farming on the property Kinross at Waitpinga, remaining there until February 1974 when he retired to Victor Harbor. Colin died on 25 August 1986 and was buried in the Adamson family plot at Mitcham Cemetery; his wife Bronwen, died at Victor Harbor on 23 July 1971, they were survived by two children, Glenys and Scott.

All photographs have been copied from originals held by Scott ADAMSON. The studio portrait of Colin was taken by Rembrandt Studios, Adelaide prior to his embarkation.