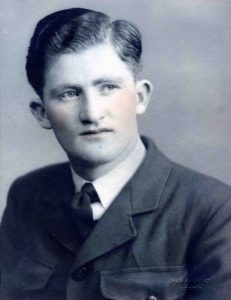 Colin Fielding ADAMS was born at Brinkworth (SA) on 23 February 1922. He enlisted in the Royal Australian Air Force on 12 August 1941 and was mustered for aircrew. He trained at No 1 Initial Training School (ITS) at Somers, Victoria and then at No 1 Wireless Air Gunners School (WAGS) at Ballarat. He trained further at Temora and was then posted to No 8 Squadron RAAF (Beauforts), a torpedo-bomber unit. The Squadron moved to Goodenough Island (off Papua New Guinea) in August 1943 and carried out strike missions against Japanese positions, airfields and shipping in the New Britain area. The Squadron suffered many casualties during the campaigns. In 1945, the Squadron bombed in concert with army operations at But, Maprik, Cape Moem, Wewak and Dove Bay. At war’s end, Colin was repatriated to Australia and was posted as an instructor at Point Cooke. He remained in the air force until his discharge on 3 June 1948.

After his retirement Colin moved to Victor Harbor.