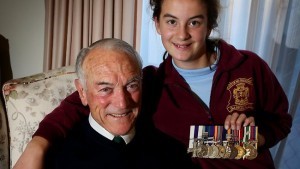 IT was one of the most ferocious yet least known campaigns of the Vietnam War. In 26 days of torrid fighting during major enemy assaults on their fire support bases, 25 young Australian soldiers from the 1st and 3rd Battalions were killed and almost 100 wounded. More than 270 enemy were killed and dozens wounded and 11 prisoners taken.

This month marks the 45th anniversary (in 2013 at time of writing) of the battles of Coral-Balmoral with veterans still wondering why the fighting has not been given the historical recognition it deserves.

The first attack occurred at Coral on May 12 and Balmoral was hit at 2.30am on May 26. Retired Major General Peter Phillips was an infantry Major and the commanding officer of Delta Company 3 RAR at Coral-Balmoral.

The former national president of the RSL this week recalled the largest actions fought by diggers over the longest period of time for the entire war. He conceded that Coral-Balmoral had been overshadowed by Long Tan where 18 Australians died in August 1966 when they defeated a vastly larger force and he said he had “no beef at all about that.”

But General Phillips, who was awarded the Military Cross in August 1968, said he had always wondered why the battles had not been given the recognition they deserved in the official and unofficial histories of the war.

“Balmoral was the high point for ‘D’ Company,” he said. “We had been there for six months and we were at our peak at that time.” The Company took the brunt of the initial assaults on Balmoral and while he would have liked his men to have been better dug in, Phillips said his machine gunners and diggers did a marvelous job in keeping the enemy off the wire. “I am not aware of any breeches and we were very lucky to have the tanks and their devastating fire power,” he said.

Australian and Kiwi arterial units also did a great job supporting the troops and providing superior fire power. General Phillips said he was saddened by the age of many of the enemy troops who were mere boys. He said he also found it hard to justify the war despite the fact that it was professionally very satisfying.

“I still regret the loss of seven of my men during the year that we were there. They were all good, down to earth Aussies.”

Intelligence would play a greater role in determining patrol strength and quick reaction forces and rapid indirect fire support were stood up to back-up sub-units in the field. The combined arms team approach still applies today.

Coral-Balmoral also proved once and for all the value of heavy armour as the tanks were credited with winning the day on several occasions. That led to the Army resisting all attempts to this day to remove tanks from the order of battle.

General Phillips, who also served in the Malayan Emergency, served in the Army for another 20 years after his “life changing” experience in Vietnam.

He is now retired and lives in Canberra where he enjoys the company of his five grandchildren.